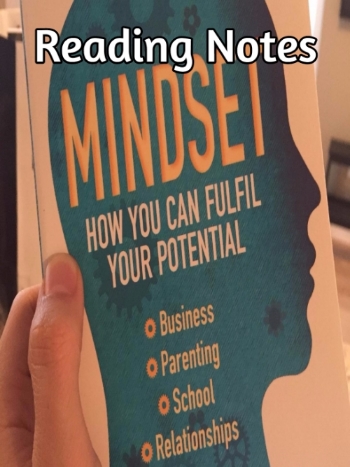 I’m very excited to share these reading notes.  This may be one of the most important books I’ve ever read.  It has completely impacted the way I view the world and how I approach many aspects of my life.  If I had to share one book with the world to recommend to read, I have to say this would affect the most amount of people, as there isn’t an area of your life that this would not affect.  Happy reading!  If you like it, make sure to grab yourself a copy!

“I think intelligence is something you have to work for … it isn’t just given to you … Most kids, if they’re not sure of an answer, will not raise their hand to answer the question.  But what I usually do is raise my hand, because if I’m wrong, them my mistake will be corrected.  Or I will raise my hand and say, ‘How would this be solved?’ or ‘I don’t get this. Can you help me?’ Just by doing that I’m increasing my intelligence.” — Child

Chapter 3 – The Truth about Ability and Accomplishments

Chapter 4 – Mindset of a Champion

“After every game or practice, if you walk off the field knowing that you gave everything you had, you will always be a winner” – Mia Hamm

“If you don’t give anything, don’t expect anything.  Success is not coming to you, you must come to it.”

Notes on my reading notes: These notes are a selection of quotes or personal notes that I take on the book/article.  They are not meant to give a comprehensive overview of everything covered in the book.  Only what I find interesting and pertains to be helpful for my own benefit is recorded.