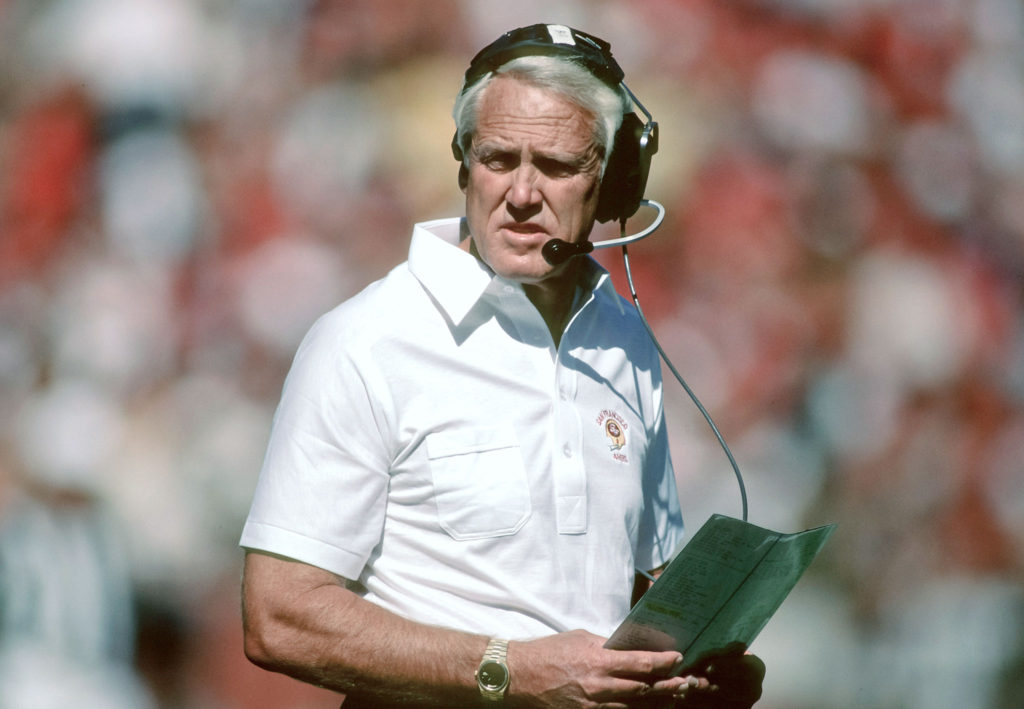 Greatest of all time that is.

Bill Walsh joined the San Francisco 49ers in 1979, taking over the worst team in the league.   In his third season as head coach, he turned the worst team, and won the Super Bowl, a first of it’s kind turn around in the NFL.  Bill Walsh went on to win three more Super Bowl’s in his career, and revolutionalized the NFL with the West Coast Offence.

We are lucky, that before he passed away, he chose to write about his leadership principles and how he was able to turn around an entire organization, from the secretarial staff, to coaches, players, and physio staff.  How to manage NFL players, some of the most egotistical people.  How to set a standard of performance and work ethic, that leads to the highest performance.

Walsh is known for his Standard of Performance, setting the bar to be the best in performance, while maintaining the right attitudes.  It is as follows …

“Exhibit a ferocious and intelligently applied work ethic directed at continual improvement; demonstrate respect for each person in the organization and the work he or she does; be deeply committed to learning and teaching, which means increasing my own expertise; be fair; demonstrate character; honor the direct connection between details and improvement, and relentlessly seek the latter; show self-control, especially where it counts the most — under pressure; demonstrate and prize loyalty; use positive language and have a positive attitude; take pride in my effort as an entity separate from the result of that effort; be willing to go the extra distance for the organization; deal appropriately with victory and defeat, adulation and humiliation (don’t get crazy with victory nor dysfunctional with loss); promote internal communication that is both open and substantive (especially under stress); seek poise in myself and those I lead; put the team’s welfare and priorities ahead of my own; maintain an ongoing level of concentration and focus that is abnormally high; and make sacrifice and commitment the organization’s trademark.”

Walsh has many facets around his philosophy of coaching, management, and leadership, however this is his cornerstone statement.  All activities and attitudes point back to this statement.  Regardless of how much you agree with his standards, Walsh highlights that it is of prime importance of a high performing organization to have high standards.

“The culture precedes positive results.  Champions behave like champions before they are champions.”

Sustained success does not happen by accident.  It always leaves breadcrumbs to follow.  So let’s dig further into his philosophy.

“I directed our focus less to the prize of victory than to the process of improving — obsessing, perhaps, about the quality of our execution and the content of our thinking, that is, our actions and attitude.”

Work Ethic “For me, the starting point for everything […] is the work ethic. Without one of significant magnitude you’re dead in the water, finished.”

Walsh was known for his fierce work ethic.  In practices, he narrowed down to the quarter of a yard where a receiver should be and turn around to expect a pass.  During practice, if a receiver stepped a quarter of a yard out of position from where he was supposed to receive the ball, even if he received it, he would stop and call the play and demand the receiver to do it again until he got it right.  His discipline for the right execution of plays is what would lead his team in high pressure situations, to be able to perform their plays like clockwork.

Quarterbacks were taught the three step, five step, seven step back, how to throw the ball, when to throw it, how to hold the ball, and practice throwing at different distances, velocities, trajectories, and angles.  Linemen were taught specific key moves, foot movement, foot positioning, arm movements, and multiple drills were designed to practice each one of these. Practices were organized and scheduled down to the minute.

Walsh had raised the bar for his team, to practice their faces off, to go further than what other teams were willing, in order to have the most well practiced execution, with the right strategy, and people who were taught exactly how they should do what they need to do at the highest level.

“Most of the [leadership] theories seem to take monumental work ethic for granted, as if it is assumed or something, as if people automatically know what it is and do it.  I didn’t assume it.  The majority of people out there don’t know what it is.”

Outside of the time Walsh spent on practices, tape, games, travel, he was planning strategy and execution.  He would plan for several scenarios under several circumstances, running what-if and scenario analysis so that he would be prepared for almost anything.

“If I’d done my work properly, little would arise that hadn’t been anticipated.  There’s always something you can’t anticipate, but you strive to greatly reduce the number of those unforeseeables.”

It also gave the team a sense of calm.  In an environment where tens of thousands of the opposing team’s fans are screaming at you, in howling wind and freezing weather, these environments and contexts are not conducive to the best decision making.  Making decisions on the fly in high pressure situations, does not produce the best decisions.  Scripts and contingency planning would assure that the decisions were made ahead of time, in better environments when emotions and distractions were controlled.

“What is the width and depth of the intellect you have applied to your own team’s contingency planning?  What could happen tomorrow, next week, next year that you haven’t planned for, aren’t ready to deal with, or have put in the category of “I’ll worry about that when the time comes”?

Managing Personell
At this point, it is no surprise that Walsh has a lot to say and think about regarding employees of your organizing. On setting his standard and letting it permeate through the organization:

“Bonding within the organization takes place as one individual and then another steps up and raises his or her level of commitment, sacrifice, and performance.  They demand and expect a lot of one another.”

“Employees can thrive in an environment when they know exactly what is expected of them — even when those expectations are very high.”

“Place a premium on those who exhibit great desire to keep pushing themselves to higher and higher performance and production levels, who seek to go beyond the highest standards that you the leader set.  The employee who gets to work early, stays late, fights through illness and personal problems is the one to keep your eye on for greater responsibilities.”

Reading Walsh’s book, The Score Takes Care of Itself, was a difficult read. It brought out insecurities of mine and I would ignore or disagree with many of his writings.  However, through reflection, it is the work ethic and discipline of a great man, who pushed it outside of the limits of my own thinking, that I realized that I am miles away from one of the greatest coaches of all time.  So what now?

“It takes time to develop the Standard of Performance; it is not just a seminar or a practice or a season’s worth of seminars and practices, but thoughtful and intense attention over years and years.”